A man can get himself in a lot of trouble in a very short time, I keep discovering. It’s only 2 and 1/2 weeks since the last time I wrote here, and I’ve managed to find all kinds of new places where I feel achy and stiff. Since those two and a half weeks mark the exact period elapsed since my last day of active harvest activity (Pressing the Syrah from Fenaughty Vineyard), the moralists among us might want to invoke something here about the Devil and one’s “idle hands, ” but I can cut that line of attack off at the knees–I’ve been working my butt off! Why? (I hear someone ask) Because we’re trying to get ready for THE BIG EVENT!

On Sunday December 3rd, between noon and 5:30pm, at Audubon Cellars (600 Addison St., in Berkeley, just west of the railroad tracks) we’ll be holding our annual POST-HARVEST, PRE HOLIDAY FÊTE du VIN, which also, this year, is going to be the long-awaited CD release party for “LONESOME ON THE GROUND” (For those among us given to such activity, please add, to your list of prayers, that the Cds arrive in time!!!!!)

There will be wines to taste (see: CARTES des VINS below) delectable morsels of food to enhance the enjoyment of the wines, merchandise to acquire for your own personal enjoyment and for those on your holiday shopping lists, friends to visit, music in the air, and plenty of good cheer all round (we can accept cash or personal checks only.) Dress warmly. PLEASE– R.S.V.P. TO (510) 981-1510, so we know you’re coming.

We will also RAFFLE off three valuable prizes, as we’ve done, now, for several years. Proceeds, once again, will go to the BERKELEY PUBLIC EDUCATION FOUNDATION. Raffle tickets will be $3.00 (four tickets for $10, ten for $20.) This great organization means a lot to us as parents (and grandparents) who’ve had, and will continue to have family in Berkeley’s public schools. The grants provided by B.P.E.F. are heroic help to chronically underfunded public schools (California schools rank 35th nationally in public funding), providing crucial support for teachers dedicated to keeping their students motivated and involved in learning, and connected to their schools and communities. The more tickets you buy, the better your chance to win, AND the more you can help. (There will be three prizes this year with approximate retail values of $200, $250, and $325) Your support each year buying raffle tickets has raised a significant amount of money, which we’ve matched, helping to make Edmunds St. John a significant fundraiser for BPEF. 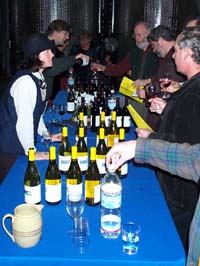 It might seem a bit odd to be tasting two Viogniers, but I think you’ll be impressed. Especially by what the ’97 can show about the potential of Viognier to improve with some bottle age.

Most of the other wines on the list are established favorites for fans of Edmunds St. John; the two wines I expect might generate the most excitement might be the two (as-yet-unreleased) wines in the center of the list. The ’98 Matagrano, from a 1994 planting close to the American River near the gold rush town of Lotus, shows the great promise Sangiovese may have in California, when farmed properly and vinified attentively. And ’99 Rocks and Gravel is easily the best R&G so far, as good, perhaps as some of the best Les Côtes Sauvages we made in earlier times. It’s also our first red wine release from the 1999 vintage, and it will give you a good idea of what a splendid vintage it was.

Then, there’s the CD. How did this happen, this secret life of Steve Edmunds? Heck, it’s a long story — who cares? If you can be moved by the human voice singing about the life of the heart, this music is for you. Eleven songs, written and sung by Steve Edmunds, backed up by a half dozen, or so, of the very finest acoustic musicians in the country, and produced by the estimable Laurie Lewis. This could be the start of something big!

A healthy, happy holiday season to all!