Each year since our first vintage, back in ’85, we’ve celebrated the completion of harvest in one way or another. The first few years we had a party for the family and friends who’d helped out with the crushing and pressing. We’d whip up a pot of stew, or a few platters of chicken, and put out olives, bread, and cheese, and a salad, and offer several different wines to sample. Each succeeding year the circle of participants seemed to widen. By 1990, the party got to be 100 people or so, and we happily provided food and wine for the enthusiastic hordes. After ’91 we decided we’d go out of business if we didn’t use the occasion to sell some wine, and, since ’92 we’ve worked hard to make partners of business and pleasure. 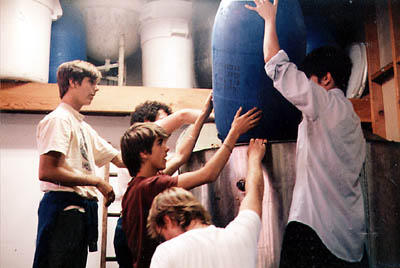 Family and friends at 1st harvest.

That first harvest was, for me, an initiation, into the unfathomable power of the earth’s eternal rhythms and cycles. When the last pressload was barreled down, and all the equipment was washed and put away for the season, I was high as a kite, and there was something about the experience that, I knew in my blood, went far beyond the temporal, the linear, the easily-explained. Out of that intoxication, and that ecstatic energy, came the impulse to celebrate, to share a sense of blessedness, and connection to forces mysterious and elemental.

Each succeeding vintage has had its own unique feel and character, to me. After the ’86 harvest, in which our production seemed just immense compared to ’85, I felt so physically drained (and discouraged when our press, filled with the season’s last load of grapes, burst into flames due to an electrical problem) that I was really apprehensive when the ’87 harvest came ’round, even more so with a pinched nerve in my neck, and a case of “housemaid’s knee” (“keep your leg elevated at all times,” the doc cautioned me. Yeah, right…) when the crush began. Also, in ’87, the flaming of the press repeated itself with the first load of grapes. Then, I borrowed a colleague’s press, and managed, somehow, to break that, too. It was the CRUSH FROM HELL. Somehow we got through it, and I knew ’88 had to be better. Bacchus at the wheel?

A colleague said to me, at the outset of harvest, ’88, “Aren’t you excited? This is showtime, right?” It helped shift me out of my apprehensiveness. Then, in ’89, despite the earthquake (and the loss of a barrel of our best wine from the quake), we produced some wines I felt were the most exciting ever. By 1990 I had begun to really understand that each harvest needed to be approached with an open heart, and an open mind.

But it was in 1993 that my body’s experience of harvest led me to a startling new perspective on my chosen endeavor. Through the great accumulation of hours that season, the realization first struck me that, of the 80 or so tons of grapes that we vinified that year, nearly every grape passed through my hands, either in the act of sorting the fruit in the receiving hopper, as it was passed into the destemmer, or in the process of emptying the fermenters at pressing. And, in between, as the fermentation pushed the skins into a cap above the juice, I’d feel the push of each cluster against the tool I used to punch down those skins. There would be times when all four of our largest open-top fermenters would be filled with fermenting grapes, each containing about four and a half tons. When it would be time to punch down the cap of skins in each one, it could take, during the peak of the fermentation, up to 45 minutes to punch down one tank. Meaning, of course, that four of them would take three hours. Since they would need as many as four punchdowns in a day, at fermentation’s peak, it also meant that over the course of that day 12 hours would be required to punch down all those caps. For one person that is an ungodly, overwhelming amount of physical effort. Back when I did most of it myself, I invariably lost nearly 20 pounds each harvest. I’m sure that relatively few California wineries practice this sort of regimen, but, for us, in ’93, it was routine.

So an enormous load of energy passes through my body over the course of those many weeks, that seems to contain the entire weight of harvest. And harvest is overwhelming. There is no stopping it; it is the irresistible force. I feel I have no choice but to surrender to the onslaught. To keep going. My mind tells me I can’t possibly do it, but as fatigue takes over, my mind stops fighting. That’s when Bacchus emerges, from somewhere inside my own skin. I may not even realize it at the time, but that’s when I start dancing with the grapes. They become my partner. There is no control. Bacchus knows what to do. I feel, in each cell, that I am participating in an ancient, elemental process, in which I have a small, but essential role to play, and it feels like a great privilege and an enormous thrill to perform that role. 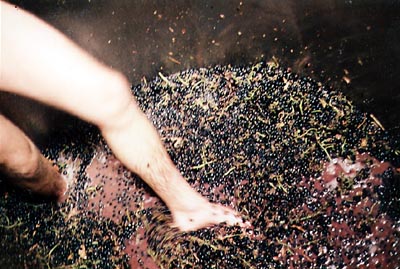 We held this year’s celebration, our Fête du Vin, last Sunday, and as always, my favorite part was the chance to see everyone again. We’ve become a kind of community, and even though some of us may see one another only this one time each year, there seems to be a sufficient sense of connectedness, so that the feeling of community is sustained; it still fills us up.

This community is constellated around the completion of harvest, something on which every community ultimately still depends (whether we like to think of it that way or not), the importance of which I think is still hard-wired in us. And it’s also constellated around the transformation of grape juice into wine, which allows us to imagine the movement from the mortal realm, through death, to the divine, and the opportunity to awaken that transformative energy in our bodies by merely drinking said wine. (Which gives that wine, assuming it’s a good one, a voice with which to speak, across that membrane separating this world from the next, and across years, decades, even centuries.)

I’ve described the intoxication I’ve experienced during harvest, some of which surely derives from having worked through exhaustion into a kind of altered state. In that altered state it seems to me that when I hear wine’s voice speak, what it has to say might be something like:

Make friends and drink wine with them.

In a dream I know it said:

Just in case you’re not who you think you are, try to find out Who you might be instead.

And I think I’ve even heard it say:

Behold! I bring you good tidings of great joy!

I’m convinced, though, in those moments, that it’s not just the wine that says these things. Everything in the natural world carries such staggering intelligence! It would seem, at times, that the whole world is trying to give us the good news. Every blade of grass, every song of thrush and humpbacked whale. Even the wind above the barley.

So perhaps the winemakers’ role, in giving wine to his community, is to remind us of our connectedness to the earth and its deep rhythms, to the divine and to each other. To help us remember, in times when things can look so frightening and so bleak, that there is good news at hand, and a community with whom to share it.

peace and good wishes to all
in this dark season, turning…