Ramblin’ Fever (On the trail of the Sacred Energy)

It’s only 9am and already there’s a filled shopping bag swinging from the hand of a slender young woman walking south on Michigan Avenue. South and North, buses and taxicabs glide past by the dozen, to the steady rhythm of red and green. The daffodil beds have come and gone, supplanted by the season of walking shorts and halter tops. From the window of this fourth-floor hotel restaurant, a Monday morning in Chicago has a comfortable look to it.

But I’m in and out of this windy town pretty fast this year — it’s two days of hotels, shuttle-vans, and economy-class seating, for one day standing behind a table in a west-side restaurant that’s closed Mondays, pouring four or five wines for the trade, and schmoozing with people I know I’ve met before, but too often don’t remember where, or when.

And really, my mind is still in France. My heart is still in Chateauneuf-du-Pape, Easter Sunday, on the terrace at Verger des Papes, the marvelous little restaurant at the top of the village. It was a perfect afternoon, passed languorously over delicious food, and wines from vineyards I could almost see from the table. It was the one day since I’d arrived when there were no appointments to keep, no deadlines to meet. I’d contemplated going to Mass in Vacqueyras, the village where we’d rented the place that had been home for the week. It seemed to me that Easter Sunday would be special in this older culture, in a (largely) Catholic country. But my body knew I didn’t have to get out of bed, and the mere act of rolling over in that bed had been all the invitation I needed to close my eyes, once again, and to sink, deliciously, back into the tender, blissful realm of sleep.

It happened that Easter Sunday, this year, was the first day, in Europe, of daylight savings time, a fact I knew only because we’d had the TV on for a brief time the previous night (the only time I’ve ever looked at TV in Europe). By then I’d begun, routinely, to think in French, and was able to discern this important and timely fact, without which I would have missed the train to deGaulle the day after Easter, and missed the plane home. So, Easter morning, when I did finally emerge from sleep, it was 11am. I showered and dressed, and as I headed downstairs to the kitchen to make coffee, I could hear the shower running at Ron’s end of the house.

Ron Mansfield, the man who manages the Wylie, Fenaughty and Izay vineyards, from which I purchase grapes, had approached me back in January about accompanying him on a trip to the Rhône. Ron was hoping to learn more about the way the French approached Grenache, Mourvèdre and Syrah, and to try to gain a greater understanding of the differences between wines grown in California and in France. I’m always glad for the chance to return to the Rhône, but my cash-flow had been pretty meager of late, so when I offered to be the guide if he’d cover my expenses, he agreed. 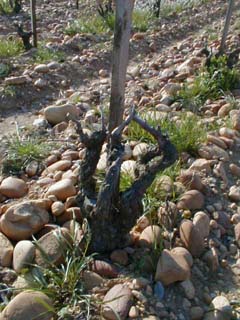 The Sacred Rocks at Beaucastel

Now the trip was coming to a close, and the only mission left to accomplish, besides getting back to Berkeley, was to collect a couple of rocks from Chateauneuf-du-Pape, rocks that Ron intended to bury for good luck in vineyards he was farming in El Dorado County. We’d harvested similar spiritual objects in Cote de Brouilly on Friday (at Chateau Thivin), and at the foot of Hermitage on Saturday night, on our way back to Vacqueyras. Over our Sunday morning coffee, we decided Beaucastel would be the place to find the right rocks for transmitting the requisite sacred energy connecting us to the spheres of Grenache and Mourvèdre. Heading out, this glorious Spring morning, felt like being a kid again, heading off to the beach with my friends to play frisbee, and build sand castles. The mission was accomplished in nothing flat, and shortly after noon, we drove into the village in search of another kind of sacred energy, the kind which comes from eating and drinking. 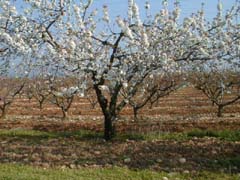 It seems that it’s only occasionally that Easter Sunday brings weather to invoke the renewal and re-invigoration represented by the Resurrection story, and this day was, fortunately, just such an occasion. We’d seen trees in bloom all week — it was high season for the flowering of cherries, peaches, and apples, and most of the vines we’d seen had at least begun to open their “eyes” (the French name given to the new buds on the vines at the beginning of the growing season). But when we’d arrived the previous Sunday, the Mistral was blowing strong, and it blew that way on Monday and Tuesday, as well, making me wish I’d thought of packing long underwear. It was freezing! On Wednesday it stopped, and the weather was pleasant and mild, on the cool side, and remained so through Saturday. The weather-gods seemed tentative. Then, Easter brought the kind of warmth that seemed to remove all doubts. 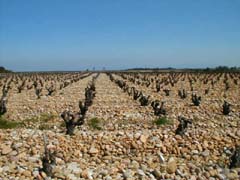 Our lunch at Verger des Papes unfolded amid a garden of tables peopled by families in their Easter finery, feasting happily, now and then pausing mid-plate of roast lamb, or terrine of eggplant, to rock a sleepy babe, or hoist a wiggly youngster on to a shoulder for a stroll to the edge of the terrace to gaze out across the broad, caillou-covered plain. The blossom-sweet air rang with the song of larks, and the laughter of petits-enfants, still buzzing from a triumphant morning of cherche-ing les oeufs. There was wine at every table, most of it the local stuff, both red and white.

It had been, for Ron, a week of immersion in a brand-new set of smells and tastes, and we’d drunk enthusiastically through many of the most illustrious appellations and producer names in the Rhône (and there were still, of course, many we hadn’t yet gotten to). Here at Verger the appearance on the wine list of half-bottles of both red and white wines from the Domaine du Vieux Telegraphe, neither of which Ron had yet tasted, made choosing easy — we could practically kill two birds with one stone.

We sat, contentedly drinking sunlight, in between sips of wine, and recounted the stops we’d made, and the wines we’d tasted, compiling a list of those that truly stood out as special, for purchase of a few bottles upon our return. The food came slowly and comfortably. The conversation came easily, rolling like tumbleweed through the meanderings of our week. We’d visited seventeen different wine estates in six days, and it took awhile to bring back all the wines, the meals, the generosity of our hosts, the exceptional kindnesses we were shown. The half-bottle of white lasted through the amuse-bouche, and the first course. It had an enchanting array of smells — wildflowers, thyme, honey, white peach, licorice, almonds. When the lamb arrived we began to explore the red. 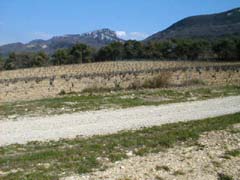 Over my left shoulder the lovely Dentelles du Montmirail shimmered in the east, dwarfed, from behind, by Mont Ventoux, which still wore a bit of snow for a crown. After the tender lamb (How could you not eat lamb, and drink red wine at Easter?; it’s the body and the blood — a communion entered with a full and open heart.) there was of course, cheese. It had been that way all week, I must confess, and of course, after confession comes penance. (Now, I’m doing Lent after Easter; I wonder if I’ll ever get it right?) The last of the red washed down the last of the fromage. Then, dessert. Espresso. Groans of happiness. Finally, the check. When we walked back down the steps into town, the bell-tower rang 5pm.

On our way out of town, we stopped to snap a few pictures. When we drove up to our abode in Vacqueyras, Madame Chivalier, our landlady, was mowing the lawn in her bikini. She smiled sheepishly, and disappeared quickly into her place, emerging moments later in more modest attire. We invited her over for a glass of Rocks and Gravel, which turned into a couple of glasses, by which time the sun began to descend, and the air began to be quite cool. So she invited us into her place, and we finished the bottle, as I tried to piece together the details of her life from French being spoken plus rapidement than I’m sure I can follow. I’d gotten pretty good at saying “oui; d’accord…,” so I think she felt okay about the conversation. Her house, and ours, were decorated with her art work, some of which was quite nice. Her current project involved painting the floor of her swimming pool The colors are bold, Provencal colors: deep blues, earthy ochres.

I’m not sure why, but we were hungry by the time we left Madame Chivalier’s, so we headed back over to Ste. Cecile Les Vignes in search of pizza.