Yesterday, and today, we bottled the 2015 Rocks And Gravel, our signal blend of Mourvedre, Grenache, and Syrah. It was the 16th rendition of that blend (1) bearing that name. In the earliest years of Edmunds St. John we called this blend by the name Les Cotes Sauvages. There were a couple of vintages where a single-vineyard blend from the West Side of Paso Robles was also bottled, under the name Los Robles Viejos, and one where that name was switched to Shell And Bone (alluding to the Cretaceous Era limestone in the local soil). There were also a couple of years when our blend from these varieties became That Old Black Magic.

There was a logic to all those name changes, but it was so much work to explain. Each new name always came about because of some fundamental way in which the wine in question differed from its predecessor, and because of my compulsion to call attention to that divergence. Hell, if I can’t change my mind, what fun is that? Here I want to offer very strong thanks to all the merchants who, after rolling their eyes (again), bought the wine anyway, because they still liked it, whatever it was called.

And despite all the name changes, we made such a blend in 30 of the past 31 vintages, and I’ve gotten a lot of practice learning the proclivities and idiosyncracies that are part of the bargain when one chooses to blend these varieties, and I’ve begun, I think, to get a feel for what works, and why (and what doesn’t, and why not).

Things really came into focus for me after several vintages of working with the grapes we were able to purchase from the Unti Vineyard, in Healdsburg.

I’d approached Unti back in 2008, because I wanted to find out what it might mean to work with grapes farmed biodynamically. While they were kind enough to meet with me, and give me a bit of a feel for what they were doing, they didn’t have any grapes available that year, and I ended up working, instead, with some Syrah from Hopland that was also BD-farmed.

Then, in the Spring of 2009 Levi Glenn, the Unti vineyard manager at that time, called me and offered some Syrah and Grenache if I was interested. I jumped at the opportunity, and, at the same time, hatched a plot to buy a concrete tank to raise the wine in. And, perhaps most importantly, I was able to persuade them to sell me a small amount of Mourvedre, to make sure I’d have enough wine to fill the tank.

For the years 2009 through 2012, I was just getting my feet wet with these grapes, trying to read how the vineyard performed vis a vis the different growing seasons. ’09 was hot, ’10 not so much, ’11 was challenging for being on the cold side, and wet for much of Spring and early Summer, ’12 was back to hot. And each year I’d been able to increase the amount of Mourvedre that I could include, which, as I noted the impact it had on the finished wine, became, in many respects the key to my approach with the wine. (Mourvedre: more better)

During those years the concrete tank proved to be everything I’d hoped it might. There was a much greater sense of freshness to the wines than I’d ever found in the many years I’d put the wine in wood. It’s true, also, that a significant part of that freshness was attributable to picking the grapes at relatively low pH, something that was almost never a simple matter, given the nature of the normal growing season in California in irrigated vineyards.

Then came the drought years, 2013, ’14, ’15. Responding to the alarmingly low levels of soil moisture, the vines’ ripening patterns accelerated ahead of sugar accumulation, before any significant hot weather developed. Picking at modest sugar levels with lovely low pH levels became the defining feature of those vintages, the vintages that I can say unequivocally are my favorites of all. 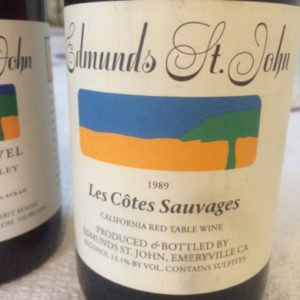 In 2013 Rocks And Gravel was half Grenache, and one-quarter each Mourvedre and Syrah. In 2014, Mourvedre and Grenache were equal, at 43% each, and Syrah was down to 14%. In 2015 Mourvedre is 47%, Grenache is 39%, and Syrah, once again is 14%. The winemaking in all 3 years was largely identical. The results, of course, are not. Each of the three has it distinct charms, and I can’t truthfully say that I favor any one over the other two; which wine I might choose to drink on a given night could easily change from one night to the next.

In recent weeks I’ve had occasion to taste a few of the Mourvedre/Grenache/Syrah blends from what I’d considered to be the other best vintages. The 1989 Les Cotes Sauvages, which was a kind of breakthrough wine for me, in terms of understanding something fundamental about how to think about producing this kind of wine from California grapes, was a fairly light wine, from a cool year. It was a wine that succeeded because of its freshness, and precision, and its nerve. The critics didn’t care so much for it (but in so many cases that has been a sign to me that I’m on the right track). It has managed, after 26 years, to still provide considerable pleasure. My sense is that the 2015 Rocks And Gravel is comparable to the ’89 Les Cotes, except its structural underpinning is considerably more solid, though it’s similarly light.

I had the 2014 Rocks the other night next to the 2000 Los Robles Viejos, and it was an interesting comparison. The 2000 wine definitely spoke of its origin in Paso Robles’ West side, and of the heat of that place in the 2000 vintage. The 2014 Rocks, more than a full degree lower in alcohol, and therefore a bit less powerful, matches its older cousin in depth; the structure is probably even more firm, and its freshness is much greater. I believe it will age beautifully for at least a couple of decades.

The 2013 Rocks And Gravel is also likely to stick around for quite a number of years, and, while I’m around to enjoy it, it’s apt to make me second-guess myself a time or two, as to whether my judgement about how much Mourvedre is enough was correct, or not.

All good stories come to an end; I received a phone call from George Unti this Spring, letting me know that they would no longer be selling any grapes. I feel blessed to have been accorded the opportunity to work with these lovely grapes for seven years, and to be able to feel like I’ve accomplished a good portion of what I set out to do in 1985 when I decided to make a Southern Rhone-inspired red blend, from Mourvedre, Grenache, and Syrah.

Of course, I couldn’t take this disappointment lying down; I am planning a new project for the 2016 harvest, which involves grapes from a different source, and which may well begin to scratch a different itch I’ve been feeling for a few years, now. But that’s a story I haven’t quite begun to write, just yet, so stay tuned, won’t you?

(1) : The blend has, in a few years, not included Mourvedre, and also, once, no Grenache. It has also included Carignan, and, a few times, Counoise, and Cinsault.