The Barsotti Ranch is situated East and a bit North of Placerville, at just under 3,000 feet in elevation. Gamay was planted for us on the Eastern edge of the Barsotti property in 2005. The soil at Barsotti is partially comprised of weathered and decomposed granite, quite similar to soils found in the Northern part of Beaujolais, and also in the Northern Rhone.

We’d had Gamay planted in the volcanic clay-loam soil at Witteres five years earlier, which produced wine with typical aromatic and flavor characteristics for Gamay, but oddly lacking in tannins, and phenolic texture, even after the vines had produced for a few years. When we harvested our first Gamay from Barsotti, in 2007, the phenolic structure was much more compelling, and the wine had a very distinctive soil signature. Presently the only red Gamay we produce is from Barsotti.

(The Barsotti property was expanded around 2011, at which time an adjacent property was acquired that included an old block of Syrah. We began producing wine from that block in 2013. In 2012 a small amount of Vermentino was planted in a block adjacent to the Syrah, and there was a small amount of wine produced from those grapes in 2014) 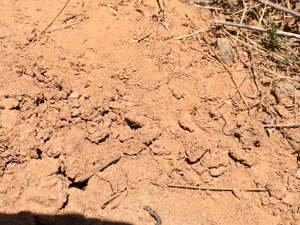