Before 2000, Bob Witters’ property was planted to Bartlett pears, for quite some time. But by 1999, the pressure of global economics drove the market price for Bob’s pears so low that it didn’t make sense for him to keep farming them. The market for wine grapes, on the other hand, was expanding, and Bob had a conversation with Ron Mansfield about putting in a vineyard to replace his pears.

Since Edmunds St. John had been working with Ron at that point for a dozen years, we spoke about Bob’s site, and it seemed like it might be a really good site for Gamay, a grape that had been on our radar for some time. Ron conferred with Bob, and in the Spring of 2000, four acres were planted to Gamay, the first planting of real Gamay in California in a generation!

Witters is situated at 3,400 feet elevation, making it one of the highest vineyards in California. The soil is volcanic clay-loam, and the land slopes gently down to the North. At that elevation, temperatures are generally pretty mild, and nights can be quite cool. The risk for frost in the Spring is fairly high, and there have been a couple of years where crop losses were substantial. 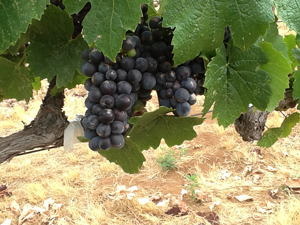