This morning it became official. The inevitable sense that comes, sooner or later, in every harvest, that “all hell has broken loose” arrived in every muscle in my body. Some time during the night, last night, as I lay sleeping, the white flag was waved and the surrender took effect. I am now occupied territory for the duration. Fatigue owns every inch.

I could blame it on Pallini’s Grenache, which I spent a ridiculous amount of time picking through last evening, to remove the leaves that were supposed to have been taken care of by three or four people who “supervised” the picking. Not to mention all the rocks that found their way into the bins. Or the weeds in the bins. Or the second crop and otherwise underripe grapes that I tossed. But if it hadn’t been that fruit it would have been some other fruit, or one more drive to the foothills or to Sonoma Valley, to tramp through the grape fields in search of the PERFECT MOMENT to pick, finding instead that the perfect moment in question was that instant when I myself became that which was harvested and given to ferment, or so it has felt each year since I began to do this.

Did I mention that we bottled, at the end of the first week of September, a large portion of our 1999 production, some 2000+ cases? It was a two-day job: as always we called in a company called the Bottling Room. They drove up Wednesday afternoon, the 6th, in their truck-cum-bottling room — a technical marvel that might challenge the mind of even the great Rube Goldberg. Inside this miraculous vehicle are all the various devices required to usher wine into its container, enclose it, and dress it up to present to the world in all its commercial glory. All mechanized, orchestrated, choreographed with split second timing that is breathtaking to behold. One stares, openmouthed, stupefied and giddy with delight at the cleverness of it. For at least 30 seconds. After that, it’s just one bottle after another for hours. And the machine sets the pace, most of the time — the help just has to “keep up.” It never fails to bring to mind the scene in the “Sorcerer’s Apprentice” cartoon, where the mops and buckets keep mulitplying at ever-increasing speed. It’s no wonder I have the impulse to find a bar nearby, and down a few on the way home from the factory. For two days we can deal with it. Besides, Cafe Rouge is nearby, and they’ve got Pilsener Urquell on tap.

All this bottling empties out a lot of barrels for the wines being fermented this Fall, as well as bringing the ’99s to completion. And boy do we keep creating stuff to fill those barrels with!

The Roussanne from the Rozet vineyard in Paso Robles came in on the 11th. We got about a ton and 3/4, which we whole cluster-pressed, and barreled. It fermented happily, just like it was born to be wine. (As with the Viognier, half was inoculated, half not.) When the sugar was reduced by half, we blended the Roussanne and the Viognier, to effect a more intimate mariage between the two. The result tastes as expected, so far — as though they were meant to be together.

Then, on the 15th, the Mourvèdre was picked. You may recall my excitement, 6 days earlier, over the appearance of the fruit. It had a similar effect on me as I ushered it into the destemmer; there was definitely something special going on here. I’m writing this as the Mourvèdre is giving itself to the pressing, and the barrels are slowly being filled with it. It’s really lovely wine, and should round out (or perhaps firm up) the Syrah and Grenache blend that grew alongside it. It fermented without inoculation. It also included the Counoise, all 700+ pounds of it. We punched it down to maximize extraction, and pumped over a few times to invigorate the fermentation by increasing the supply of air for the native yeasts. Shortly we’ll blend it with some of the Syrah-Grenache blend to ensure the completion of the primary fermentation, and the mariage of the four varieties in the blend. (It is felt that the way the different varieties interact in a blend is more harmonious and successful if they ferment together, at least for some part of the fermentation.) I’m revisiting the FLYING BLIND theme here, but by using only about a third of the Syrah-Grenache blend at this point, I’m allowing myself quite a bit of discretion to adjust proportions later, by adding anywhere from 0-8 more puncheons (132 gallon barrels) of the blend.

On the 19th of September the Syrah from the other new fruit source for us, the Bassetti vineyard, arrived. Ellis and Suzie Bassetti own one of the prettiest spots in California, on North Green Valley road, near Cambria, a farm property where Ellis grew up, and, as mentioned before, where together they’ve grown flowers and herbs that they dry and fashion into beautiful wreaths which are sold all over the US through a variety of mail order catalogs. There’s a spectacular, fairly steep 5 acre knoll on the property, that had begged to be planted to Syrah, and when Ellis finally understood what the hill was saying to him, he went ahead and planted it, and we were lucky enough to connect with the Bassettis and sign up to work with the grapes.

In my last installment, I talked about how the birds were threatening the crop, but the next visit I made (right after the bottling) Ellis had netted against the birds. Now, with those grapes in the fermenter, they’re showing the darkest, most intense color I’ve seen in a new wine, and the flavor is deep and compelling — perhaps this is another star, mid-birth.

Steve Hill has been calling me every few days, it seems, to come look at the Syrah grapes at Parmelee-Hill (and Durell); so things are moving in this harvest season, toward ripeness, and with any luck I’ll be able to keep dancing till the music stops. (And catch my breath, before the next tune comes up.) So just keep tapping your foot in time, and, as Arlo Guthrie once said, wait for the next verse to come around on the guitar…

In the Bottling Room:
labeling In the Bottling Room:
Steve Edmunds on the line 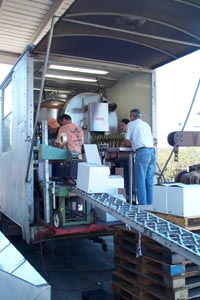 Out of the truck and into the light 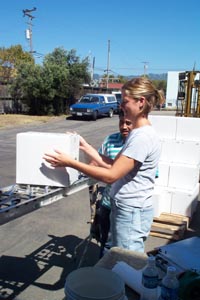