“Your eyes are playing tricks on you.” Ever hear that? I have this memory, from adolescence, perhaps, of looking at a photograph of some part of the moon that featured a great concentration of craters, and being instructed, by the caption for the photograph, to look at the photo upside-down, and to notice whether it began to appear that what I saw weren’t, in fact, craters, but more the very opposite, i.e., rounded mounds of dirt. The suggestion was both powerful, and completely effective; any time I saw an image of a crater after that, it very quickly turned itself inside out, and became its opposite, and it was sometimes extremely difficult to reverse the process. I imagine I’m not the only person who’s encountered this phenomenon.

And I believe it’s true, too, that the way I experience the world, and my life, largely depends on what the stories are that I can tell myself about what’s in front of me, in order to connect point A to point B, so I don’t get lost. So when I look at a picture like this one, it’s not just a picture of two women looking at a pot that one of them holds, and smiling. 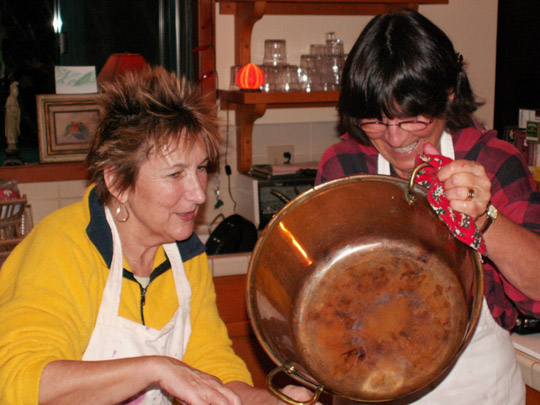 I know these people; I’m married to the one on the left. She’s the most precious human being on the planet to me. The woman on the right is one of her dearest friends (mine, too). The pot she’s holding, has been, on this shadowy afternoon in late Fall, a cauldron for the cooking of the season’s plum crop, grown in trees on the South side of her house, plums that she’d frozen after picking, in mid-Summer.

These plums aren’t plums any longer; they’re jam. They’re preserved, to be eaten, spread on toast, or muffins, this winter. Or next Spring. Or two years from now, or ten. Eaten by cousins, friends, sons, daughters. Grandchildren. They carry forward the heat of the sun in July of 2005 in Point Reyes. Cornelia and Bonnie make jam from these plums every year, and the jam carries forward, too, the care and the love they lavish on it.

As the afternoon of peeling, chopping, measuring and stirring, stretches out before them, they share stories of family, of children and grandchildren, of cares, and sadnesses. And they tell jokes. They drink a little Scotch. Their conversation is not so different from a long walk in the woods. Sometimes I wonder how they find their way back. There’s a tenderness, and an abiding love that carries forward, too, that’s preserved inside the heart.

And the annual cooking and preserving of the fruit carries forward, too, the procession of generations upon generations of the preservers of fruit, of culture, of warmth, of connectedness. They’re like members of a kind of Army, most of whom are, more or less, invisible.

Bonnie’s husband Jeff took this photo. He managed, somehow, to snap it just when a wave of energy passed through Bonnie on its way to Cornelia; you can see it there, poised to leap from one to the other. That’s one of the amazing things about Jeff—you don’t always know what he’s up to; he can be pretty quiet, but he comes through with the goods, just when you’re thinking “there’s only one thing that could make this better…”

And check out that copper pot. Cornelia, herself began to wonder, looking at this picture, whether she was looking at the inside or the outside of it. Yet, when the picture was taken, the weekend before Thanksgiving, she knew all too well which side of the pot she was looking at. And she knew, deep down in her bones, the story in which she was acting a part, the picture of which bears witness, above.

Just a few weeks later, on the day of Solstice, we managed to get all seven of our grandchildren to our home, to enjoy their company, to make gingerbread houses, to raise a ruckus, to make a joyful noise. The day began early; 5 year old twins Megan and Emily St. John woke Noni (Cornelia) while the sky was still dark (and would be for yet a couple of hours). Seven year old Olivia Edmunds was here not too long after sunrise; I think Noah was the next to arrive, but it could have been the other way around. By lunchtime the joint was packed with wee bairns, including Ana Kate Berezniy-St John, age 5, Aidan Berezniy-St John, age two, Noah Silverman St. John, age nine, and Sophia Rose, age 20 months. Sophia’s Mom, Heather, and Aidan and Ana Kate’s Dad, Matt were present for much of the day, along with a good friend, Bryn, who took the group portrait you see here. At the moment this snapshot was taken, we were all singing “Twinkle, Twinkle, Little Star.” It happens that well over 100 photos were taken this day, including dozens of group shots of these same seven, but this is the only picture in which the energy of all was focused in the same direction. Almost a miracle! And something to carry forward, preserved inside the heart, like the sunlight on the South wall of a house in Berkeley on a mid-December afternoon, a vineyard where love toils.

Peace to you, in this dark season, turning…