Ramblin’ Blues: In search of the World’s Greatest Pizza

Over a period of 5 days in June of 1996, I visited winegrowers in the Rhone valley with the estimable Robert Mayberry, who is, among other things, the author of a most useful and comprehensive reference work titled: The Wines Of The Rhone Valley (Rowman & Littlefield, 1987). Between appointments one day, on our way east through the Vaucluse, (and here you must remember that the hours between roughly noon and 3pm are not available for any sort of business-related activity) Robert mentioned a possible destination for lunch which he claimed offered “the best pizza in the world.” That sounded pretty good to me, but it also sounded like a pretty extraordinary claim. There must be hundreds of thousands of pizza joints in the world; “I wonder,” I remarked, “if you’re not being just a little…um, hyperbolic?” Duly chastised, Robert replied,”well perhaps it’s a bit too much to say the best in the world,’ but it’s awfully good.” It sure sounded tantalizing, so, in short order, we found ourselves at Angelus, in Ste. Cecile les Vignes.

They make a number of different pizzas at Angelus, in a wood-fired oven, but their signature pie: “l’Angelus,” featuring capers, garlic, tomato, anchovies, and olives, is the most satisfying and delicious, hands down, and I finished lunch that day feeling that, in fact, Robert may have been correct. So, when I returned to the area this Spring, the first Monday night, when nothing else seemed to be open, we headed for Angelus, to fill our hungry bellies. We weren’t disappointed; the pizza was, again, completely satisfying and lip-smacking good. But we also noticed (in my case, I remembered) that smoking is a common activity in French restaurants, a feature that, for me, detracts in a major way from the enjoyment of both food and wine. In spite of that, we had a very good time.(The wine list at Angelus consists almost entirely of wines from the local co-ops. We opted for a bottle of the rose from the co-op at Visan. It was terrific, very fresh and vibrant, featuring juicy acidity and a bright fruity character. Dry and mouth-watering, utterly seductive, it’s a perfect accompaniment to the pizza. This is the kind of wine/food combination of which I never tire.)

On Easter night, when we’d already eaten so well, and with such abandon, at Verger des Papes, (our lunch: see Organolepticians #27) and needed just a bit of something late that evening to tide us over until our departure in the wee hours of Monday morning, Angelus, again, seemed like just the ticket. When we got there at 9:30 the joint was jumping, but, surprisingly, there was a table. We were quickly seated, and immediately began resenting the smoke drifting toward us from the next table. Then, when the menus arrived, lo and behold! They listed take-out! We quickly decided to get a couple to go, and in two shakes we were back on the route to Vacqueyras, salivating from the aromas emerging from our pizza boxes. Having the pizza in our dining room gave us the chance to drink one of the wines we’d picked up in our travels of the week just past. It came from one of my very favorite producers, (one whom, as it turns out, I’d also visited on the same day when I’d had the marvelous pizza from Angelus for the first time). His domaine is in the Departement du Gard, in the village of St. Gervais. Domaine St. Anne is the property of the family Steinmaier, who came to the area from Burgundy. The domaine grows both white and red grapes, and their wines are prized for unusual freshness, purity of flavor, and balance. Although the wines are finely structured and elegant, they age exceptionally well, and often reward 15 or more years development in bottle. My favorite of their wines is the blend named for the village, St. Gervais, in which Mourvèdre is the dominant grape, at roughly 65% of the composition. Grenache accounts for most of the rest, with a bit of Syrah rounding it out.

When we’d visited the domaine on Monday, the highlight, for me, had been the chance to taste, from the enamel-lined concrete tank, the 2001 Mourvèdre, unblended. Ordinarily, tasting at a Southern domaine means tasting wines already blended from the various component varieties. I’ve tasted plenty of Mourvèdre here in California, that I’ve vinified, and I have longed to taste the variety unblended in France, to discover similarities and differences that might be instructive. The 2001 Mourvèdre at St. Anne is a wine that brings tears to one’s eyes. The aromas of violets, truffles, mulberries, cherries, raw beef, pepper, and licorice are breathtaking. And Mourvèdre has that amazing way, on tasting, of simultaneously whetting one’s appetite, and quenching one’s thirst. The wine showed, at its tender age, only a tiny bit of what it will have to offer when it’s fully developed, and that little glimpse was completely captivating. 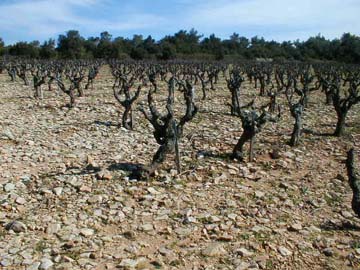 When I gave M. Steinmaier a bottle of 2000 Rocks and Gravel as a thank-you for accomodating our visit, he reciprocated by proferring a bottle of his 1990 St. Gervais. He probably didn’t remember, but I’d tasted that same wine on my visit back in ’96, and found it to be one of the most impressive and beautiful wines I’d ever encountered. I bought 18 bottles of it on my return to California.

It was great to have the chance to drink the ’90 St. Gervais with Ron; it demonstrated, better than I could ever hope to explain, what I longed, as a winemaker, to accomplish, working with Mourvèdre, Grenache, and Syrah. And it made the world’s greatest pizza even better.

The day Ron and I visited Steinmaier had begun a bit south of St. Gervais, in the tiny hamlet of Cadignac, at the Domaine la Remejeanne, in the rocky hills above Bagnols-Sur-Ceze. It was really our first morning in France (since the previous morning had actually passed, for us, in an airplane), and we arrived at Remejeanne when the Mistral was blowing full-tilt. We’d not yet had coffee, since we’d had to race to make our appointment (not wanting to make a bad impression), so between the freezing-cold wind, and the craving for a bit of coffee, I confess I was feeling somewhat miserable.

We’d gotten in extremely late the previous night (Palm Sunday) after a really lovely evening visiting with the Bouchards, who are both dear friends, and vignerons in the northern Vaucluse commune of Valreas. Romain and Nancy Bouchard had visited chez Edmunds St. John in 1994, and we’d shown them around San Francisco, across the Golden Gate Bridge, and up into Marin County. (Romain, at age 70, reacted to his first sight of a giant redwood tree, in Muir Woods, with his mouth wide open, and a look of astonishment in his eyes that suggested that he was really a 5-year-old. Two years later, as he watched the ritual re-enactment of a Summer Solstice myth at the town square in Valreas, I saw that same look on his face, despite his having witnessed the same performance every summer for nearly 30 years. His open heart, and his capacity for delight are inspiring to behold.) Then, after my visit in ’96, they’d hosted my daughter, and she’d worked the harvest for them. So the visit this Palm Sunday was like a family reunion.

I won’t soon forget the lamb that Romain cooked in his fireplace that evening, that seemed to be the very tastiest lamb I’d ever eaten. Nor the taste of his 1970 Valreas red wine, made entirely from Grenache, grown on the vines around their house, which was still vibrant and lovely, at 32 years of age. I was glad we drank that after my 2000 Rocks and Gravel, which, enjoyable and Rhone-like as it is, was a bumpkin of a young wine next to the ’70 Bouchard.

It ended up being nearly 1:30 in the morning before I turned out the light in my room at our Vacqueyras crash-pad, and though I’d set my alarm for 7:30 that morning, it was five minutes to eight before it actually woke me, jet-lagged as I must surely have been, and our appointment at Remejeanne was at 9:00, so we had to rush…